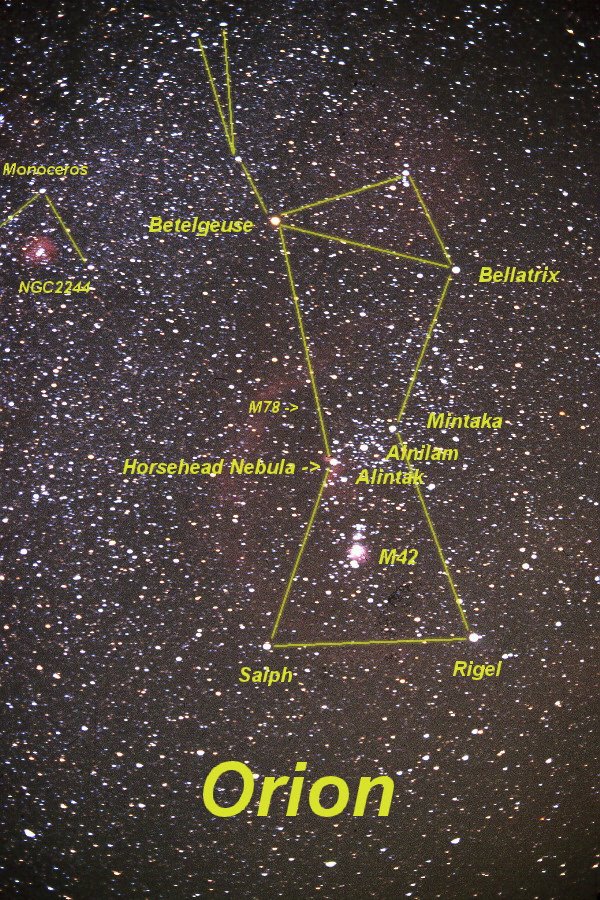 Last night I went out to look at the night sky, fully expecting to see Orion high in the sky, with his trusted dog Sirius. But low and behold, they were not there. I have loved watching Orion on these long winter nights, and he has become like a dependable friend. Orion is one of the easiest constellations to find, since he has that wonderful belt made of three stars, and his arms and legs are spread strong and wide, like the warrior he is. And in that belt is a nebula, that I can actually see sometimes with my astronomical binoculars (which cost only about $70!) Orion’s belt is featured in the Hubble 3D movie, which is spectacular and I highly recommend. For more information on Orion check out this article and pictures in Wikipedia.

But Orion was missing! I pondered what might have happened to him, when I noticed way low on the western horizon the three stars of his belt. And I realized, that Orion was leaving, his time in the sky over until the next winter. I felt sad that I would not see him in the summer nights. And I wondered what would take his place. So I looked up and I saw the constellation of LEO, the Lion! I smiled and felt relieved. Leo is also a very easy constellation to see, with his beautiful curved maned head. So check it out. And if you can’t find Leo on your own, download Stellarium for free at http://www.stellarium.org/ It is a great program to help you see the night sky.
So, I’ll miss you, Orion. But I’ll see you next winter, and until then, I’ll just have to get to know Leo a bit better.

Stephen Hawking, arguably one of the most brilliant men alive, just came out and said that there probably were alien life forms in the universe, and we probably should not go looking for them! He said that based on how Earthlings have treated exploration (i.e. conquest) of other cultures we should be willing to consider the fact that aliens might not be very nice. He mentioned Christopher Columbus and the treatment of Native Americans as an example. There is going to be a Discovery Channel series on him called called Stephen Hawking’s Universe. Here is the link.

Now, normally I would not consider this too seriously. But, I just saw the film District 9, which was such a realistic view of alien life and our likely treatment of aliens as “others”, that I took notice. The film was great, really clever and very well done. I highly recommend it. And, I saw the Hubble 3D film too, which is such a magnificent journey into a very very very large cosmos. There just has to be other life forms than us in all those billions of stars. As Hawking says, “To my mathematical brain, the numbers alone make thinking about aliens perfectly rational”.

Last night I had a dream about going into outer space. It was inspired by the movie about the Hubble camera that I had just seen. The ship that was taking hundreds of us to space was like a cruise ship, very comfortable and huge. My husband and I had bought trip insurance which provided an exit strategy if the trip became dangerous (sorta like trip insurance you get when you go to a foreign country where you are guaranteed to be airlifted out ). But I realized that unless I spent every minute with my husband on the trip, that I could be alone if the ship ran into trouble and would have to deal with it by myself. I pondered that, and realized that I would be o.k. and that on some level we are all alone anyway, and that I would be fine by myself.

Interpretation: This dream is about doing something unknown and the risks that are involved in taking off to some place you’ve never been before. It feels good to have a companion on the journey, but on some level we are alone, and we need to remember that we are capable on our own. Which was all well and good until aliens took over the ship!!

Last night my husband and I went to see the Imax show of Hubble 3D. It was absolutely amazing and as close to space as I’m likely to get. The 45 minute film showed the initial launching of the Hubble camera, and then the fixes that have been made to the lenses over the years. The most recent fix was in 2009 when a wide range lens was added, allowing even more amazing photos to be taken. After participating in the fascinating work of the astronauts, including training underwater on a full size replica of Hubble, we get to go for a ride through space using the awe inspiring photos sent back by this amazing camera.

Some of the images (in 3D!) were of the nebula in the Orion constellation. Orion, with his hunting dog Sirius, are two of my favorite constellations because they are so easy to identify and have such a great mythic story. The camera takes us into the center of the nebula in Orion’s belt where stars are forming. I can’t express how fantastic it is. Then we go out, out, out, to the edge of space, past billions!!! of galaxies. Wow, is all I can say.

And in all of these billions of stars, the earth stands out as our livable, protective space. I really got, in a visceral way, how huge the universe is and how our Earth is a delicate jewel in this sea of space. I wish everyone could see this movie, so we would quit destroying this planet with pollution and nuclear bombs, and instead do all we can to protect this fragile egg that so delicately surrounds us and protects us.
You can find out more about the film and see some of these awe-inpsiring photos at http://hubblesite.org/

In peace, and here’s to Earth Day!
Lilan

Subscribe to the monthly Moon Letter and get thoughtful insights into what's happening in the sky, in our world, and within you.
Your subscription is private and secure. Lilan will never share or sell your information.
Thanks for signing up!